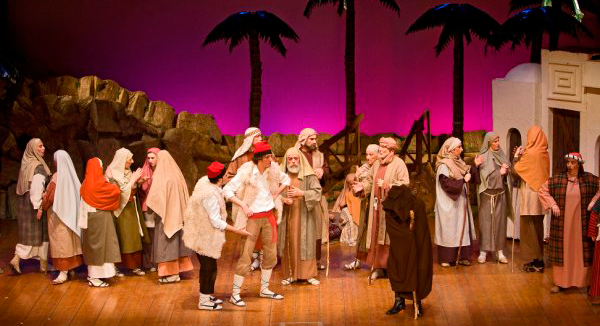 In this time of the year shepherds come up to the stage for playing the most famous Christmas’ show in Catalonia: Els Pastorets (The Shepherds).

Els Pastorets is a traditional performance very rooted in Catalonia and it is inspired in an evangelical Christmas’ story. Its origin goes back to the 15th Century and that’s why it is usual to attend the show with all the family. Each performance is unique and it is mixed with music, dancing and, usually, with a low-cost scenography due to the fact it is directed by amateur theatre companies or town associations and it is played in churches or social centres.

The plot mixes religious liturgy and fight between good and evil, angels and demons, as well as culture and tradition. The main feature of the show is its political criticism and mockery of the society.

We must say Els Pastorets have been a shelter for Catalan language in a repressive and hostile environment. Along the dictatorship the performance haven’t been forbidden so it became a tool for keeping alive Catalan culture and language.

← Where do you want to live?
Barcelona, dressed up as Christmas time! →