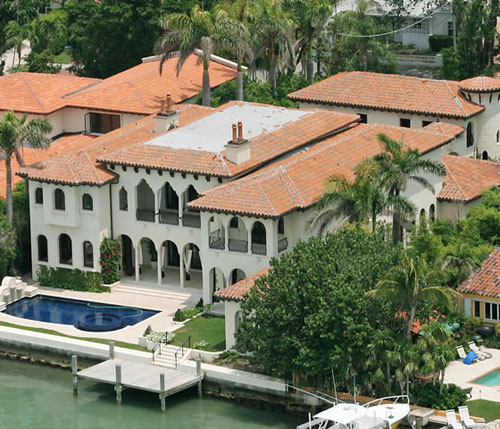 We discover the properties where celebrities live and, good news, some of them are for sale! Perhaps saving a little, one of us would be sleeping in the same room where Ricky Martin and Nicolas Cage once slept. Pay attention!

The apartment of this musician, composer, DJ and photographer goes on sale for 5 million euros. It is located in the NoHo neighborhood of New York and was designed by the architects Ogawa / Depardon with high quality finishes. A privilege in downtown New York!

After the controversy around him related to the tax evasion – he wasn’t living and declaring his profits in France- by buying a house in Néchin on the border with Belgium, he decided to sell its Parisian mansion, built in the nineteenth century, and located in the neighborhood of Saint Germain for 50 million euros. The house has been purchased by an unknown buyer.

The Forbes family, owner of the publishing house that publishes each year the list of the richest in the world, where they could well be also included. Forbes are the owners of the Naushon Island, near the Massachusetts archipelago, an area surrounded by natural forests. The island, measures 19.18 km2 and has a population of 30 people. It has been in the family since John Murray Forbes acquired it a century and a half ago.

The former Ricky Martin‘s house is on sale for $ 21 million since the beginning of 2015. The property is across Biscay Bay, North Bay Road, where other “celebrities” such as Jennifer Lopez or Matt Damon have also lived. The mansion, built in 1937 and of nearly 9000 feet, has two floors, 6 bedrooms, 6 bathrooms, high ceilings and an outdoor pool.

In 2006, the actor acquired for 3 million dollars the island Leaf Cay, a paradise of sand beaches placed in the chain of islands Exuma, in the Bahamas. It has been catalogued as one of the nicest of the whole archipelago by its tropical palm trees and a small pond of fresh water. It is an island of easy access with all the services in a 16 hectares where there is a main residence,- that of the actor, sold in 2006- with 300 m2, 3 bedrooms, 3 baths, veranda, wide lounge, a dining room and a  kitchen. Also, an office block and services of 1750 m2 with gymnasium, library, laundry… And 2 guest houses with 3500 m2 with capacity for 7 persons with all the serviceability, and an apartment of two floors.

The footballer has just acquired an  super deluxe apartment in the building of Donald Trump, The Trump Tower,, for “only” $18.5 million. It is located on the 5th Ave. and measures nothing less than 232 m2. It has 3 bedrooms and 3 bathrooms. The inside “maximalist” style of the apartment was designed by Juan Pablo Molyneux. The property has views of Central Park, ithe Hudson River and the Empire State Building.

The former singer of “The Beatles” has spent more than $15 million in this penthouse in New York City, three-story divided into 325 m2 with 5 bathrooms and 4 bedrooms with natural light and amazing views of New York.

← Architecture at the office: 13 of the most creative ones
“Festes de La Mercè” Barcelona annual city Festival →