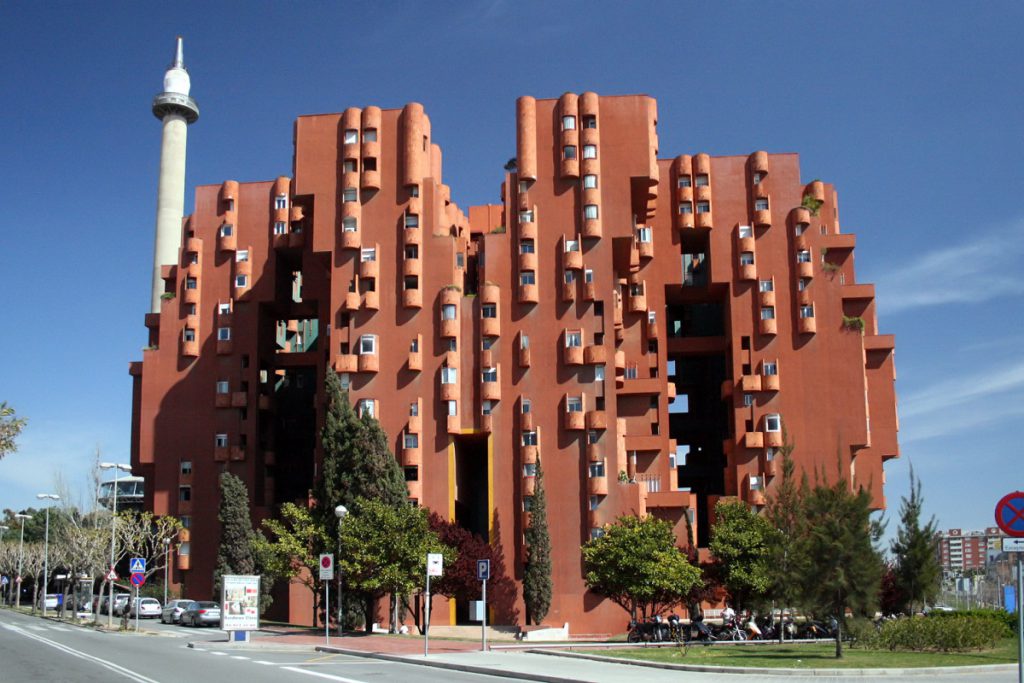 Some weeks ago we published the first episode of the weirdest buildings of Barcelona. Actually, we didn’t imagine there were that many! But seeking we’ve realised that there are a few! We have to take into account that Barcelona is a cosmopolitan city and it is closely linked to the architecture so, it was obvious that some building would be out of architectural standards.

He it goes our ranking!

It was inspired in the utopian fiction of Walden Dos, by Burrhus Frederic Skinner. The main intention of the architect was to create a vertical city with flats, streets and shops. Its interior is like a labyrinth, with 7 patios connected in vertical and horizontal.  Besides, these are connected by aisles named as 20th century personalities such as Chaplin, Marx, Kafka or Albert Einstein.

The Vela Hotel is 99 meters high and it has 473 rooms. It was a controversial project since the beginning. At first it had to be 168 meters high but it was changed according to the city council due to the fact that the city skyline couldn’t be modified and the twin towers, formed by Arts Hotel and the Mapfre Tower, had to be the highest buildings of the shore.  Besides, according to some ecologist associations this hotel infringed the Coastal Protection Law and it occupies public land.

The building – Telefonica’s headquarters – is 110 m high and has 24 floors plus 2 underground floors. In 2010 was awarded with the Quantrium Prize to the best Project and in 2011 with the LEAF AWARD to the best business building of the year.

This luxury apartments is a work of the Japanese Toyo Ito, winner of the Pritzker prize in 2013. It is a conceptual and a timeless design. According to the architect, it is a tribute to Gaudí.

Projected by Lluís Domenech i Montaner and built between 1905 and 1908 mixing materials and arts such as sculpture, mosaic, stained glass and wrought iron. In 1997 it was declared Heritage of Humanity by the UNESCO.

It was built in 1992 because of the Olympic Games. This is the tower used for the audio-visual transmissions to the rest o Barcelona. Nowadays it has a viewpoint at the 10th level as well as several rooms equipped to hold any celebration.

It is a construction designed by Calatrava in 1992 for the Olympic Games. Actually, it silhouette reminds to an athlete carrying the Olympic flame. This tower is 163 metres high and it works as a sundial with its shadow projected in the Europa Square. Its exterior is made with “trencadís” as a tribute to Gaudí.

The CMT building, Telecommunications Market Commission, is located in the 22@ neighbour in Poblenou. It is designed as a net that adapts itself to the building volume and gives solar protection thanks to its exterior terraces with stone natural pavement and garden pots.

Media TIC is a space for creative people, an incubator for entrepreneurs and a meeting point for the practice and learning of ICT. Its floors are open spaces and modular. There is a vertical patio that connects with the environment. The structure absorbs sunlight and emerges at night, transforming it into a luminescent building. Its architect, Enrique Ruíz Geli compares it with a jellyfish.

The Arts Hotel was one of the first “weird” buildings in Barcelona. It was built for the Olympic Games, is 154 meters high and has 44 floors. It is a blue glass tower with an external structure in white iron. Actually, during many years it was thought that the building wasn’t yet finished because its structure looked like a scaffold. The 5 stars hotel belongs to the Ritz-Carlton chain and was opened in 1994. Besides, it has 30 luxury apartments.

← The smallest mansion in the World
The feast of St. John →